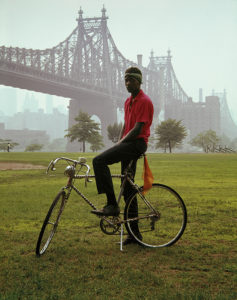 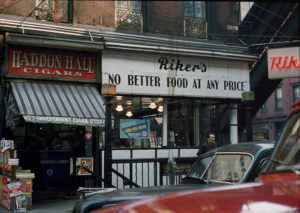 Fleeing Hitler’s arrival in power, Evelyn Hofer’s family emigrated to Switzerland, where Evelyn enrolled in photography courses in Basel and Zurich by the charismatic Hans Finsler. Following the same path and the same teachers as Robert Frank, Evelyn Hofer moved to New York at the age of 24. It was the place to be, where artistic careers took off.

Alexey Brodovitch, artistic director of Harper’s Bazaar, gave Hofer her first commissions for prestigious magazines like Vogue and the New York Times. But she showed little passion for fashion commissions and that industry, instead preferring, unlike William Klein and Robert Frank, who haunted the same streets, to carry without exception her large format camera and her heavy tripod as weapons of choice. The likes of Klein and Frank were enthralled by the frenzy of the city which they captured with their Leicas. They were on the move, at the heart of the action, taking in faces and scenes anonymously, then turning their heels, to one subject or another, guided like Jazzmen or dancers by the kinetic score of the city that never sleeps. Evelyn Hofer preferred real encounters; her street photographs are portraits and in fact, all her images are portraits, even her architectural views and the objects of her still lives seem to pose for her. With the writer Victor Sawdon Pritchett, she worked on a book project on New York, and it’s in this context that she captured the majority of her images of the city. She worked in black and white as well as colour, at a period when colour photography was still excluded from the realm of high art. Before the big names. Before Eggleston. Before Stephen Shore. The colour printing method at the time, dye transfers, bathe us in a feeling coated with timelessness. If all the portraits are posed, there are none then which appear artificial. If August Sander photographed social categories, Evelyn Hofer simply photographed people. A hot dog seller, a milkman, a doorman or policeman of Brooklyn, Manhattan or Harlem… the quality of her gaze upon her subjects faithfully translates her tropism for simple people, for those who day in day out make the city of iron and concrete, which is dominated by height and seems to care little for these beings and their survival. The period of these photographs, 1953 to 1975, are also those of Martin Luther King and the Civil Rights Movement, and the affirmation of those demands seem to be embodied in the postures and the looks in many of her shots. Hofer’s first exhibition in France was described by a critic of the New York Times as “the most celebrated unknown photographer of the United States”. Who knows that’s due to her status as a woman, or simply because she wanted to stay discreet, true to herself?

This exhibition is produced in partnership with the Galerie M Bochum, Germany and Le Centre photographique Rouen Normandie.